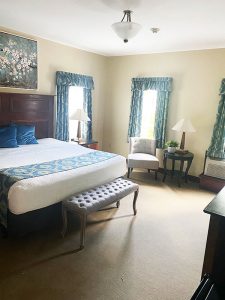 MILFORD, PA – Tom Quick Inn, one of the Tri-State area’s longtime favorite destinations, has reopened its bedrooms to guests, following a series of extensive renovations by the inn’s new owner and operator, Milford Hospitality Group. The unveiling of these rooms marks a return to the landmark’s reputation for dependable, comfortable lodging – a status that dates back to the 1800s.

Although the now famous Tom Quick Inn was established in the 1940’s, the location itself has long been synonymous with hospitality. In the late nineteenth century, what is now the Tom Quick in was two separate buildings: Center Square House, a hotel, and Terwilliger House, a boarding house and restaurant, both of which became popular destinations for residents throughout the Tri-State area. In the late 1940s, both properties were purchased by Bob Phillips Sr. and became Tom Quick Inn. The remnants of both original buildings are respectively listed in the National Registry of Historic Places.

Tom Quick Inn’s freshly refinished rooms now combine the old-world charm for which the inn is famous with the contemporary amenities modern guest have come to expect. Each of its twelve guest rooms is perfectly suited for relaxation after a long day of touring Milford’s many historic, cultural, and natural delights.

The refinished rooms also compliment the Tom Quick Inn’s four private event spaces, allowing attendees of functions at the inn to celebrate into the night knowing a clean, comfortable bedroom awaits them upstairs.

Tom Quick Inn is one of the flagship properties of Milford Hospitality Group, which was formed, in part, to restore the historic inn to its rightful place as a community centerpiece and national gem. From upscale dining and craft cocktails to antique décor and creature comforts, Tom Quick Inn has everything needed for the leisure of its guests. For more information, please visit https://tomquickinnmilford.com/ or call (570) 832-8500.